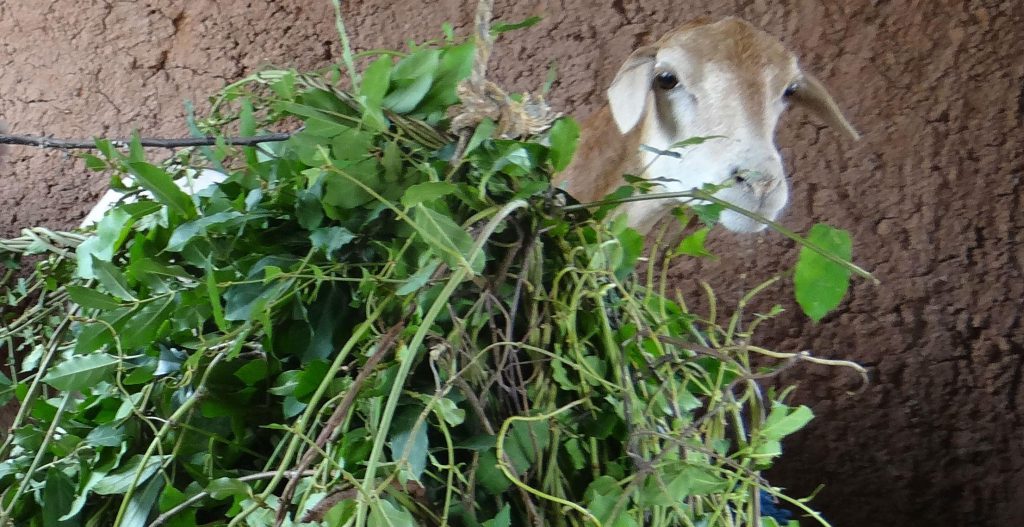 Why Planting Legume Trees in Mali is Important

I have always enjoyed working with goats and sheep on my aunt’s farm in Wisconsin, where these small ruminants are thriving, but Malian flocks are struggling to grow. Malian goats and sheep need our help to thrive in the increasingly arid conditions. Because of human actions, trees have been disappearing in Mali over a long period of time. This has contributed to the decline of sheep and goat flocks. Legume trees will help solve this problem.

One reason for the disappearance of trees, is that farmers were cleaning out areas of trees for their crops. Another reason is that trees are cut down and the wood is used for cooking and heating. In the village of Finkolo mining activities have left enormous open pits and waste in the normal grazing areas. Bourama Sissoko, our project manager says, “We are assisting the dramatic decline of trees and shrubs that have always been used to feed ruminants.”

The cost of feeding goats and sheep has increased by three times over the last ten years because, forage has become scarce. Despite the fact that over 30 percent of the population rely on small ruminants as an income source (it is the countries third most important export) few Shepherds  plant feed or flora for sheep and goats.

“This boy said he was coming to Africa to plant trees. And he came!

When he returns he doesn’t knock, but enters, as my son.” Village Elder

Planting trees in the villages will help both the health of the flocks and the economics of the Malian people.

Legume trees help with what is called green manure, and also provide shade and forage to the sheep and goats. The dry season in Mali begins in April and droughts are frequent. Two types of trees that will be planted by Common Pastures in Malian villages is the Albizia lebbeck and the Glyricidia sepium. Both of these legume tree have pods that remain on the tree for 3 to 4 months and drop during the dry season. They can be eaten directly from the ground without the need to be harvested and gathered by shepherds.

Margaret Summerfield is a Botanist and retired professor. She says, “The leaves, flowers, and pods can all be used as food for the sheep and goats and provide an excellent protein supplement during the dry season.” The fallen leaves and flowers are prized by sheep though the goats prefer to eat from the trimmed branches.

The trimmed branches are important as a cut-and-carry crop. These trees are highly productive and provide a quality leaf yield comparable to Leucaena leucocephala the most popular forage tree but more susceptible to pests.

According to Bourama Sissoko, “Growing legume trees will decrease the cost of production and improve the health status of animals for a sustainable development of livestock production in Mali.”

I care about conservation, the environment and animals. If you care, and would like more information about the importance of planting trees in Mali, West Africa, contact me at asherplantstrees@comcast.net. I am coordinating the legume tree planting project with Common Pastures as a Youth Ambassador. The value of a legume tree in Mali…PRICELESS!

“I learned….I will always have a home in Africa.”