Mr. Yacouba Diarra is a holder of an Advanced Vocational Diploma (BTS) in geology. Having entrepreneurship in his blood, in 2002 he decided to create in Bougouni city a Group of Economic Interest (GIE) called Agro-Services Business “The hope of farmers” to support wide-ranging farmers and boost the economical development of the circle of Bougouni.

To mix business with pleasure, he started in 2004 a small scale fish farming project as there is a high demand for fish in Bougouni. Many other farmers joined him by implementing their own and seeking advice and technical support. The same year, fish farmers organized themselves and elected Mr. Diarra as the President of Bougouni fish farmers cooperative.

In 2011, through a USAID/Mali funded project called Integrated Initiative for Economic Growth in Mali (IICEM) under the USAID/Feed The Future – Farmer-to-Farmer program implemented by Winrock International, provided three training workshops for the cooperative to build their capacity in fish pond implementation and management as a business.

In 2014, Mr. Diarra was hired by International Fertilizer Development Center (IFDC) as a Commercial Director in Bougouni to provide fertilizer to farmers and develop business in rural areas. This position gave Mr. Diarra new vision by noticing that dry crops farming activities are only covering six months of the year (May – October), while small ruminant farming can be done year-round. Additionally, these two activities complement one another and add value to both activities’ by-products. Thanks to his strong leadership, Mr. Diarra convinced farmers to implement combined farming and extended the cooperative’s activities to the 26 communes of Bougouni circle, gathering more than 500 members (4 percent women). Mr. Diarra was also elected in 2015 as the President of the Union of Bougouni Farmers’ Cooperatives.

The dearest dream of Mr. Diarra is to build capacity of farmers, share his extensive experience gained through Winrock International and VEGA/F3P Farmer-to-Farmer programs with skilled volunteers, and establish a Rural Training Center in Bougouni for to showcase country-wide the sustainability of the VEGA/F3P project. 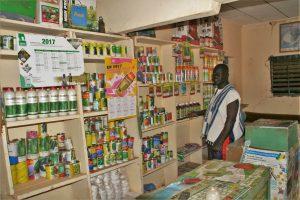