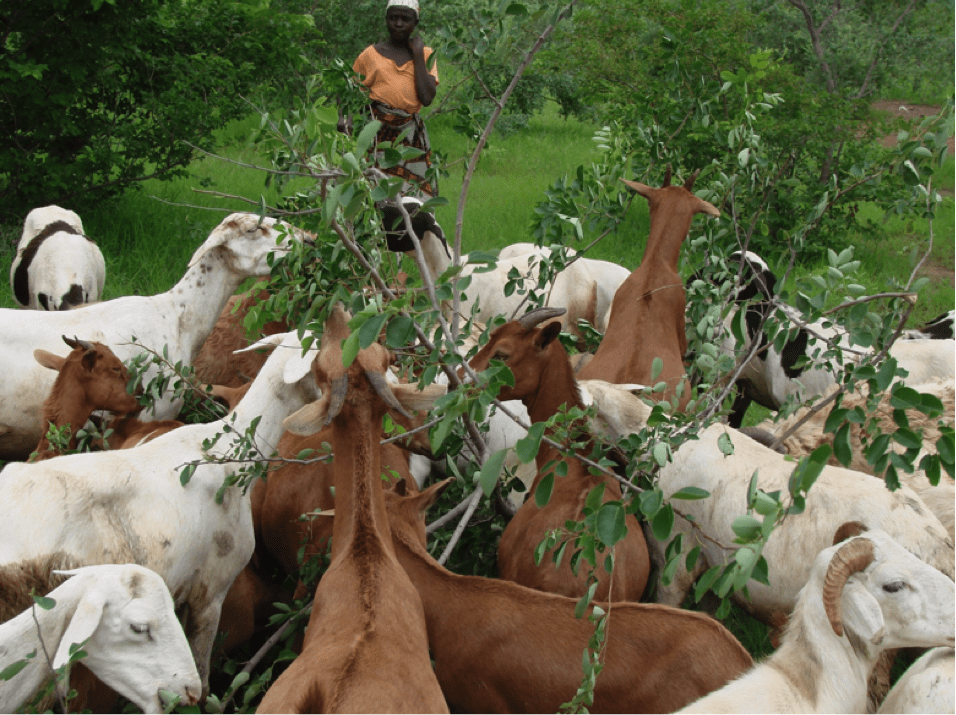 The primary objective of this assignment was to provide the F3P supported farmers with knowledge, skills and tools to practically implement better strategies for feeding animals on a year-round basis to provide better marketable products (e.g., meat, milk, breed). Although sheep and goats will survive periods of drought through scavenging, their production and life span suffers. Farmers are not always aware of the cost of this lost opportunity. Lack of feed during the dry season is an ongoing challenge for producers, but can be helped with fodder trees.

Previous years’ legume fodder tree plantings were evaluated and issues noted. Over 3,000 seedlings of Leucaena leucocephala, Gliricidia, sepium, and Moringa oliefera, were transplanted into common lands associated with the cooperatives during 2016. In the Koulikoro and Bougouni areas, farmers have been producing their new saplings from seeds and cuttings for planting during July and August 2017, matching the rainy season. The farmers are planting more trees with seeds and cuttings from the previous year’s planting in fodder banks and facilitating seed exchange between cooperatives. BGGC provided an approximate 25% match with legume saplings, mostly Glyricidia, as these trees grow significantly slower and require three to four years to produce seeds. Glyricidia, in our experience, does appear to survive tough conditions better.

The Leucaena and Moringa plantings have been expanding in the project common areas as these two trees grow quickly and provide seeds within a year.

The Katibougou farmers, as expected, experienced the most difficulty in managing their tree fodder banks due to late planting during the end of the rainy season and destruction by wandering animals, especially cattle, sheep, and goats.

Trees in protected fields such as at Toula village near Bougouni, had the highest survival rates due both to higher rainfall and adequate fences.

Tree Banks:  Two tree banks have been established, one in Katibougou and the other in Toula near Bougouni. During year

1 saplings from U.S. donations were planted. Due to rapid growth of legume trees, seeds and cuttings were harvested for the year 2 plantings. In addition, farmers purchased approximately half the new saplings from local nurseries encouraged by the project to carry fodder trees. U.S. donations provided an irrigation well at Katibougou, Koulikoro to help compensate for the significantly dryer  weather (see map page 3).

Equally crucial for successful fodder shrub and tree production is protection from sheep, goats, cattle, and other hungry animals for the full 12 months per year over a period of several years. The fodder shrubs and trees used in this and other projects are highly palatable to livestock – they were selected because of this attribute – and will be browsed by roaming herbivores if left unprotected. This is especially difficult on a large basis, but if the Cooperative members work together for their common cause, it can be done. Care must be taken to protect the transplants sufficiently high, as small ruminants, especially goats, can jump fences.

In Process: The establishment of small fodder banks in an enclosure stand provides the highest chance for success.

The first steps were taken at the Katibougou cooperative. The layout plan had on-farm shrub/tree fodder banks of 2,000 trees in a block planting arrangement. The saplings were sourced from small, local tree nurseries in the Koulikoro region. The area is fenced and irrigation is being set up from a new well.