Our volunteer Dr. Khalid worked with two organizations to implement oyster mushroom production to increase food diversity, improve nutrition and eliminate barriers in local foraging. Oyster mushrooms offer a multitude of benefits for people around the world and we wanted to go more in depth on the impact they can have for forests, cooking, nutrition and the environment. 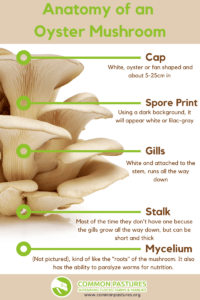 The report was an oyster mushroom otherwise known as Pleurotus ostreatus. The cap of the mushroom is oyster shaped (part of the reason for the name), or fan shaped at about 5-25 cm (2-10 in). It is smooth and will not have any scales or warts that other mushrooms may have. Unlike other common mushrooms, the stem of the oyster mushroom can not be seen for the most part because the gills are attached, running most of the way down. If the stem can be seen, which is not common, it will be short and thick.

Another way to identify mushrooms is to conduct a spore print, which uses the gills of the mushroom while on a material to create a print. The spore print of an oyster mushroom is white and can be lilac-gray so the background must be dark to be able to see the markings.

The oyster mushroom we are mainly discussing has a white cap, gills and stem but there are other colorings including gray, blue, yellow and pink.

REMEMBER! Mushrooms can look similar and only experts or people who have studied mushrooms should consume mushrooms that are consumed in the wild. A safer alternative would be to buy a grow kit from a reputable seller, grower or local organization. 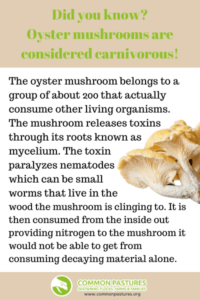 Oyster mushrooms are hardy and very adaptable. Technically speaking these mushrooms can grow just about anywhere if they are given the right growth conditions as you can see from the previous report.

In the wild, oyster mushrooms prefer temperate and subtropical forests throughout the world. These forests support trees that are the favorite of oyster mushrooms, deciduous and conifer trees. Some examples include oak, maple and spruce trees.

You will see this mushroom only taking hold on matter that is decaying. This is because the mushroom is considered to be a saprotroph that feeds on the nourishment of decaying matter. In the wild this could be material such as a log, fallen trees or dead standing trees. If you see a similar looking mushroom growing on a living tree you should be cautious or avoid all together. 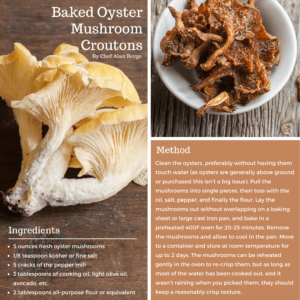 “Oyster mushrooms are mild-flavored, often used as a garnish or in a blend with other mushrooms,” said Alan Bergo, a chef from the Minneapolis-St.Paul area.

Like the majority of mushrooms, when cleaning them it’s important to not add additional water as it can mess with cooking times and general water content of a dish. Instead of rinsing it like a vegetable or fruit, it’s best to either discard dirty parts or gentle wipe with a dry or slightly moist paper towel.

Oyster mushrooms have many great health benefits but it’s important to not only store it correctly but to cook the mushroom properly. To prevent potentially toxic proteins that can exist in the mushroom, it is recommended to cook it above 140 degrees.

Oysters are rich in protein, B vitamins and other properties that have been studied to prevent and reduce health risks. One cup of sliced oyster mushrooms is 37 calories, 3g of protein, 0g of fat, 2g of fiber and 6g of carbs. It’s a great addition to a diet of someone who is vegetarian or vegan because of their nutritional benefits.

Some of the vitamins and minerals found in oyster mushrooms include:

There have been studies on the vitamins and minerals that exist in oyster mushrooms to reduce health risks. Studies have shown a decrease in the size of tumors as well as preventing cancer. With their native lovastatin content, they have also been studied in helping modulate blood cholesterol levels. Lovastatin is considered a “statin”, a property that is present in many medications to raise the good cholesterol levels in the blood.

Mushrooms and the environment

Mushrooms could be the key to reducing pollution. Like an oyster mushroom, it is considered a fungus that consumes dead matter, providing opportunity to see how mushrooms would be able to absorb other material that could be harmful to the environment otherwise. Some of those ways include consumption of oil, runoff and air pollutants.

One scientist tested the use of mushrooms to filter sewage runoff from a septic system. He wood chips and mycelium-infused growing material at the top of the opening to promote the growth of the mushrooms. After a year, the sewage runoff was lowered to safe levels, about a hundred times less.

This experiment led scientists to look into using mushrooms to remove oil pollutants from the soil. After many trials of different mushrooms that are considered “white rotters”, oyster mushrooms were shown to overcome the oil. The scientists covered the spawn in oil and within three weeks the oil was consumed while the mushrooms started to grow through the material. Oyster mushrooms are still being studied to effectively reduce the impact that oil disasters have on the environment.