To support the ongoing breeding program, trainings and hands-on demonstrations were provided on genetics and nutrition for students at the Centre d’Apprentissage Agricole Samanko, University of Ségou, Agri-Sup Ségou, and for members of the Association of Livestock Producers of Bougouni. One presentation was on linear appraisal for goats, with application for sheep, as a means to select for milk production by secondary, morphologic traits. A second presentation was on the concept and calculation of inbreeding and other measures of relationship between animals in a herd or flock with the objective to plan future matings to diminish or even eliminate inbreeding. A third presentation was on the organization of community-based breeding programs and its use in improving a breed, not only in individuals, but also in the breed population. 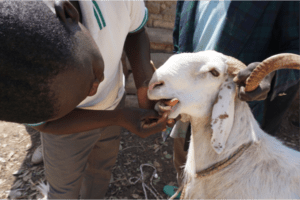 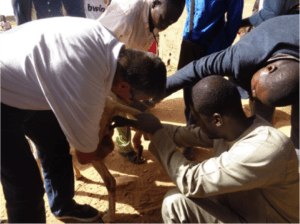 Dr. Terry Gibson demonstrates how to examine sheep and goats as part of preventative health instruction.

Best practices were emphasized to assure a good foundation of animal health and nutrition before engaging in genetic improvement. Improved genetics will not be expressed without this foundation. These best practices include:

• Use anthelmintic when needed and on an individual basis.

• Treat crop residues such as bush straw, corn stover, sorghum stover, or rice straw with urea to increase the feed’s digestibility for sheep and goats during the dry season. It is advisable to begin this process of urea treatment when crop residues are available and plentiful. Residues from corn or sorghum should be chopped to provide a greater surface area for the treatment process and to increase subsequent intake.

• When molasses becomes available, make urea molasses blocks and give them to sheep and goats for supplemental feeding, especially during the dry season. If molasses  is not available, then search for a suitable replacement such as honey or a fruit syrup, such as from mangos, when the fruit is abundant and cheap.

• Health and milk production requires water to be available at all times.

• Institute a community-based breeding program with bylaws and policies.

• Remember that most economic traits are quantitative and are affected by genotype and environment. So it is important that members of the community-based breeding program practice a standard health and nutrition program.

• Castrate all inferior males, those rams not selected, and control the breeding of the sheep; otherwise there can be no genetic improvement. 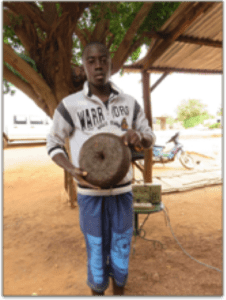 Improved Breeding Practices: It is difficult to measure immediate improvement or impacts, but knowledge of genetic improvement was transferred and attitudes seemed to have changed. The advantage of consecutive assignments is that one can see the  impact of previous assignments and what is understood or not understood. Further training is needed on the selection and identification of how to identify superior breeding stock along with the concept of a community-based breeding program.

Training in inbreeding and its negative consequences was conducted. Rams and bucks will be moved between cooperatives and then replaced so that new genetics are introduced to each  group. However, a deeper understanding is needed to ensure improvement. 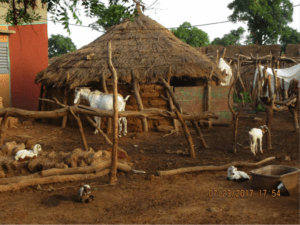 Last February, training in supplemental nutrition (urea treatment of roughages and fabrication on urea-molasses blocks) was  given in the same locations as the present training. The Deputy Director of Agri-Sup informed us that the replication of the urea treatment of straw has been incorporated in their extensive education of producers in the surrounding area. This is encouraging as urea treatment and ensilage is an inexpensive method of improving the nutrients of crop residue.

In addition, Yacouba Diarra, the president of the Farmers’ Cooperative of Bougouni, has continued with the fabrication of the urea-molasses blocks and has made modifications that better match the local environment.  He has increased the amount of cement and keeps the freshly made blocks in the shade for two days before moving them to the sun to dry. It is expected block production will continue and become a source of income for cooperative members.