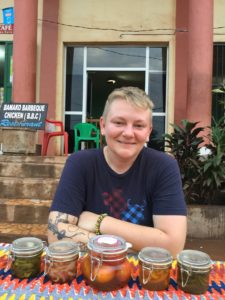 Morning activities included visiting the market for fresh vegetables and the butcher shop to choose the animal. The carcass was brought back to the restaurant. All parts were used or preserved. Curing, smoking, and pickling were taught because electricity to keep meat cold was erratic.

A series of trainings was provided specifically to chefs, and their staff on menu development, presentation and production flow. This included three chef/owners and 13 staff of the Sleeping Camel, Bamako Barbecue Chicken (BBC) and the Broadway Café. Nine of the staff were young adults, including a few who had been homeless before being employed at the BBC. The owner of BBC has a strong commitment to training young adults off the street. He provides the opportunity for youth to learn, and develop their confidence  while taking on the responsibility and authority to make food preparation decisions.

In another training, Sarah taught 16 employees at the three restaurants/hotels how to butcher and utilize the entire animal, including fish, lamb, and goat. They used all the off-cuts and offal to provide a unique dinner to guests of Sleeping Camel, Broadway Café and BBC. They introduced testicle soup, braised intestines, braised tongue, grilled livers and hearts, chicken heads, and feet to guests, tourists and employees. The utilization of off-cuts and offal provides an opportunity to taste something different while on a budget.

New menu items were introduced to guests, and feedback was requested. Full use of local ingredients was emphasized to make from-scratch menu items along with a nose-to-tail, full carcass approach with meats. In addition, two tasting events were facilitated at BBC to introduce the new menu items created. Flyers were produced and distributed in collaboration with BBC’s staff. Common local ingredients were used. One of the events featured offal and the three chefs created six dishes from cow testicles, intestines, tongues, liver, tripes and hearts. The restaurant was packed. The expats who came had nothing but great words about the food.

“The offal dinner was the highlight of our collaboration. Half of Bamako came to the party. That is an exaggeration, of course, but the restaurant was jam-packed.

We heard nothing but high praises. I am particularly proud of my cow’s balls soup, because it was first time to do it. A woman from United Nation claimed that it was the best soup she has ever tasted. (Naturally, she became my best friend.)

The dinner party was so exhilarating that we decided to have another one, and I suggested that we focus on pasta. Considering how many grains they have here, I thought it would be exciting to create a dinner that promotes the local flours. As fate would have it, one of the guests owns a large rice-contributing company. I charmed him to sponsor the party.”  — Benedicto

Meat: New ways of using the entire animal carcass (i.e., fish, lamb and goat) were explored. As an example, a whole goat was purchased at the live animal market, slaughtered, cut up, and smoked for quick sandwiches as well as using the liver to make pate for a spread. Market vegetables (e.g., carrot, okra, green pepper, and onion) were pickled to use as a condiment. Methods of preparing meats combined with vegetables were experimented with leading to a special dinner event featuring off-cuts and offal. A creative menu consisting of testicles, intestines, tongue, livers, hearts, chicken heads and feet along with vegetables was introduced to staff and delighted guests. “Best meal I have ever tasted” raved a restaurant guest from the United Nations. 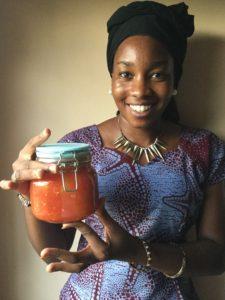 Vegetables and Fruits: Local vegetables were pickled to use as a condiment and compliments to their menu. The recipes can also to preserve fresh, nutritious vegetables and fruits from the local markets. Fruits and vegetables are easily preserved by drying, canning and pickling. In-season baskets of ripe, fresh fruits and vegetables line the roadways. Limes readily grow in Mali and can be used to raise the acidity level for canning. Supplies needed are simple and include a heating source, stockpot, mixing bowls, knife, slotted spoon, fork, and sterilized jars with lids.

The recipes for pickling and preserving can be used not only as condiments and compliments to their menus, but also to preserve fresh, nutritious vegetables and fruits from the local markets. The chefs all had concerns about the electricity and refrigeration issues in Bamako. Demonstrating economical methods of preserving the nutrition and freshness in meats, fruits and vegetables was an important part of the assignment.

“I provided the businesses with recipes and ideas to continue to grow their whole animal production as well as learning how to pickle and preserve not only vegetables, but meat as well.

All of the staff at all three restaurants were attentive and curious learners in respect to the butchering. I did one side of the animal while the staff took turns with parts of the other side. They were quick learners and eager to get their hands into and try for themselves whatever I was teaching them.” — Sarah 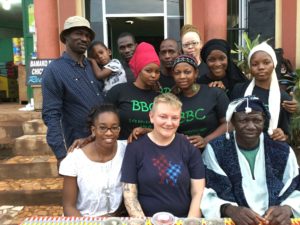