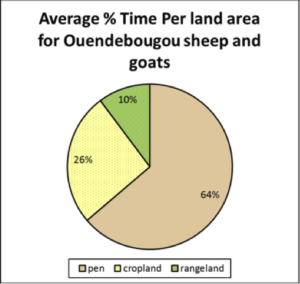 Percent time spent in the pen vs. rangeland vs. crop fields by a ram and two nannies tracked with GPS units at one minute intervals over approximately three days in June 2017 in the Ouendebougou. The data suggests insufficient time was spent grazing.

Matt McIntosh focused on GPS tracking of sedentary small ruminant herds to understand livestock grazing patterns on rangeland and crop fields and included:
• Testing a lighter GPS (igotU) model furnished by New Mexico State University and cost shared with BGGC.
• Development of a GIS database and corresponding maps of land cover types (whether village, cropland, or rangelands) within a 3 km radius of the villages of Dougoukouna and Ouendebougou.
• Training and development of a protocol for deployment and data retrieval of the igotU GPS devices.

The use of GPS collar data results allowed informed discussions with farmers on the challenges of food shortage and herding styles. Data collected during an assignment in Koutiala last year suggested that the time that small ruminants spent grazing while on their daily herding circuits was insufficient to meet their nutritional needs. This demonstrated the need for providing additional forage in the village pens to fully meet the needs of their small ruminants. The topic of cassava silage was discussed as a potentially economical, alternative feed source.

“This assignment allowed us to do something that I believe is also novel and that, to my knowledge, has not yet been achieved with our stakeholders in the United States. That is, to use livestock GPS data to inform grazing management decisions and diagnose grazing problems. The fact that we were able to discuss our GPS results with village farmers and that we were able to receive their reactions to these results, is a novel phenomenon even for rangeland managers in the U.S. I am proud that we are pioneering efforts of this sort in the villages of Ségou in Mali!” – Team Leader: Dr. Andrés Cibils

Farmers in Dougoukouna indicated that they thought the Koutiala example was similar to their situation. They mentioned the scarcity of grazing lands and problems with parasite loads in grasses harvested from the Niger river banks at this time of the year. One of the farmers indicated that since the first cassava training he had successfully and consistently used cassava foliage to feed his livestock. 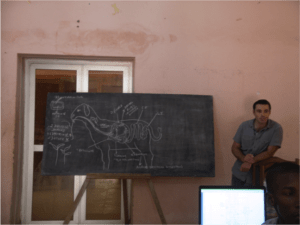 Matt teaching small ruminant anatomy and rumen processing at the University of Ségou.

Land within this radius was classified into three categories: 1) cropland; 2) rangeland; or 3) village. In the case of Dougoukouna, a fourth category was created to account for areas occupied by the Niger river. Roads and the main highway were also digitized on the map shown below. By merging satellite and geospatial technologies, grazing locations and activities were visually displayed and showed potential nutritional gaps.

The GPS collar tests in Dougoukouna and Ouendebougou were successful. Preliminary data showed movement velocity patterns similar to those observed in the data sets collected in Koutiala and Dougoukouna in 2015-2016. It was also possible to determine the time spent in different land cover types. Movement velocity and distances traveled (approximately 8 km/day) suggest that animals were spending insufficient time grazing when they were out at pasture. This technology allows for the development of strategies to use high protein supplements (e.g. legume browse trees, cassava, urea byproduct silage) in the most cost effective and efficient manner. Data collected also allows for the determination of : 1) the kinds and amounts of feed that small ruminants are likely harvesting while grazing; and 2) the amount of energy they are likely to expend doing it.